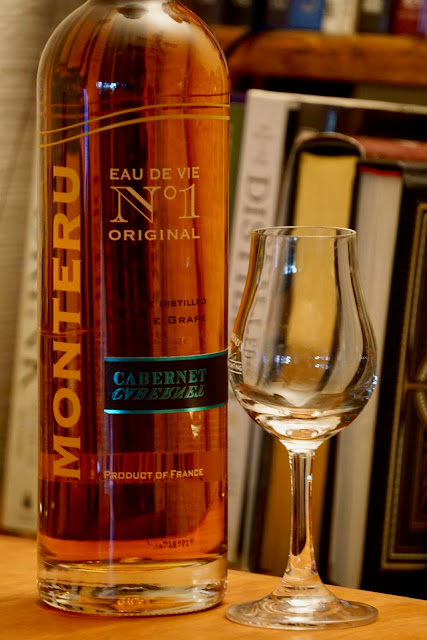 Monteru Cabernet (40.0%): And the season finale of Monteru's single grape eau de vie line up is distilled exclusively from "Cabernet"... Now I have a question though: Cabernet what..? There are almost two dozens grape varieties including the hybrids which can fit the bill here. Well, at this point I think it's safe to assume that it is Cabernet Sauvignon since people from wine industry mostly use the short form "Cabernet" for Cabernet Sauvignon but still it's not more than an educated guess. I really don't know why they didn't want to put the full name of the grape on the label. It struck me a little odd... Anyway before jumping to the tasting notes below if you want to take a quick look at the posts about the other three single grape distillates of Monteru please click on the links Riesling, Chardonnay or Merlot.

Color: And Cabernet is the darkest in color among all four. Light amber, polished copper with thin, slow moving and oily legs around the glass.

Palate: After that quite promising nose the palate is kinda let-down. Very watery and thin... Caraway seeds, chervil and fennel fronds. Pastis, cork and white pepper.

Overall: Too bad that the palate didn't follow the nose quite well. In the end Merlot was the winner for me among all four different single grape distillates. I feel like although Chardonnay and Cabernet were pretty close the dryness of Cabernet made be prefer it over Chardonnay. And Riesling was the one I liked the least... In general all of these bottlings could use an abv boost and slightly longer aging. Please note that Monteru went through a major revamp since these releases though. They kept Chardonnay, Merlot and Cabernet (New labeling actually says Cabernet Sauvignon not Cabernet) in their portfolio and dropped Riesling. They also added Folle Blanche and Sauvignon Blanc as new releases. Even though they boosted their bottling strength only by a very small fraction they added distilling and bottling dates on their label. I am very intrigued to try the new releases if I can find them around... Will keep my eyes open.