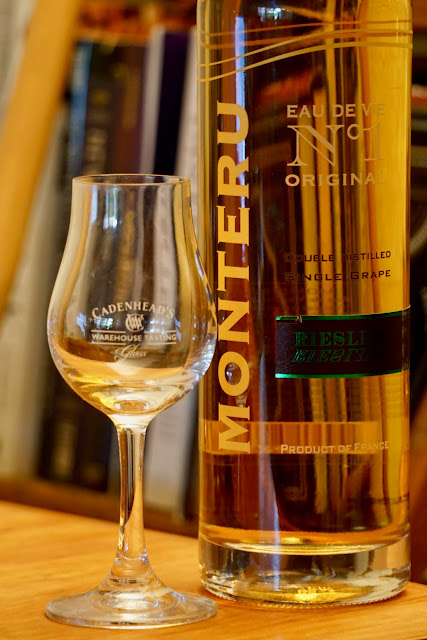 Monteru Riesling (40.0%): Although Monteru is a brandy distilled and aged in Cognac region of France it is not labeled as one because of the estate's preference of using grape varietals which are not approved in the region by AOC to be called Cognac and also them finishing their distillate in charred American oak barrels after the initial maturation in French oak casks. They like to distill their eau de vies from single grape varietals and label them accordingly to highlight the differences between them and actually lately they started to draw attention to the differences between batches and vintages as well. For some time ago right when they were about to revamp their entire portfolio including bottle shapes, labeling and packaging I ended up with four bottles of their products with older designs and I was sitting on them for years. This week finally I decided to pull them out of my cabinet and give them a go... I am starting with their Riesling eau de vie today and then planning to continue with Chardonnay and Merlot finally ending the series with Cabernet later.

Overall: Unfortunately it's very sweet and thin for my taste... Of course it doesn't mean that it cannot create wonders in the hands of a very talented bartender in a mixed drink but still not my cup of tea. It is more of a utilitarian spirit rather than being a sipper for sure. I was also surprised how sweet and citrusy the overall characteristics of the spirit was considering that it was unadulterated. Was it distilled from a late harvest Riesling wine..? If yes would the sweetness transfer into the distillate so well..? I am not sure but now I am more curious than before to taste the other three grape varieties they bottled and compare.