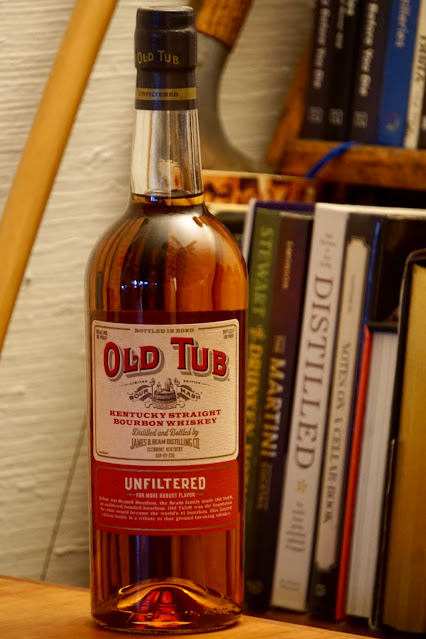 Old Tub Bottled in Bond (50.0%): This is a bourbon I meant to write about some time ago but got distracted with other samples arriving. Well, better late than never... It is basically a non-chill filtered bottled in bond version of Jim Beam's flagship bourbon White Label. It used to be a gift shop bottling offered at the distillery only and I never had a chance to taste it before but now it has been made available nationwide. This is actually my second bottle in less than two months, so I obviously liked it but let's talk about it a little more in detail.

Overall: Really? Did just not-chill filtering the old good Jim Beam White Label and bottling it at a higher abv. ended up at this level..? This is a serious step-up we are talking about. Count me in then... By all means... 20 bucks well spent. If you feel more like in the rye/spice/less-peanut team like I am you should probably stick to Old Grand Dad BiB from Jim Beam's portfolio at the same price point but if you like more peanut/apple/caramel in your bourbon this is a no brainer. I really hope that they will keep this in their line-up... Because if it will stay widely available at this price I am quite sure that we will start to see these bottles on the bar shelves as soon as they are allowed to open their doors to public.