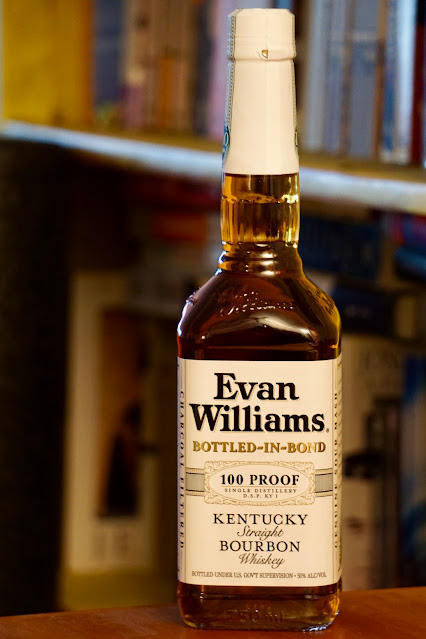 Evan Williams Bottled in Bond (50.0%): Second inexpensive whiskey I purchased for this year's holiday season cocktail marathon is Evan Williams Bottled in Bond (#StayBonded)... It is again a brand from Heaven Hill's line-up like Rittenhouse BiB I posted about the day before and distilled from a mashbill of 78% corn, 10% rye and 12% malted barley. It is aged at least four years in charred new oak barrels.

Palate: Grilled corn on the cob, whole cloves and cinnamon. Cream soda, burnt brown sugar and paprika. Didn't think that I will need to add water but it drinks like it's higher abv and also has a great texture. After only a couple of drops: Not bad but it really didn't add anything super interesting. Maybe some boiled peanuts, more cinnamon and crushed red pepper. We lost that texture I really liked before though. Well, at least we know now that it can handle ice.

Overall: Great... That's about it... I just paid 16 bucks and forget about using in cocktails I am totally happy to sip this bourbon anytime anywhere... A quite good step up from Evan Williams Black Label at a hard to believe price. I am not a big fan of high corn bourbon mashbills and not so excited to taste corn driven notes such as peanuts, caramel popcorns, etc. most of the time but again no further discussions: This is a very solid bourbon.