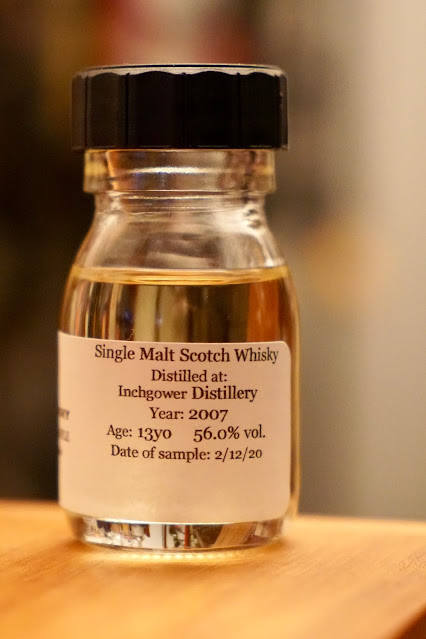 Watt Whisky Inchgower 13yo (56.0%): I always had a soft spot for Inchgower because believe or not I am a big Bell's fan..! Bell's has been my favorite pub whisky ever since I started to travel to Britain more frequently in late 90s and spend longer periods of time there. As a youngster not having a lot of money in his pockets I somehow chose to favor Bell's and Pusser's Blue Label among all other cheap spirits on pub shelves and I still do... Inchgower is one of the original malt components in Bell's blend and the distillery used to be owned actually by Arthur Bell & Sons. They purchased the distillery in 1938 to distill whisky for their signature blend exclusively but after the company got merged with DCL in 1987 to form United Distillers and eventually became Diageo the whisky distilled there started to be used in other blends from Diageo's portfolio as well utilizing their pretty sizable capacity of 3,2 million liters. The sample I received from Watt Whisky is a thirteen year old one distilled in 2007 and bottled in November 2020 from an ex-Bourbon hogshead. 297 bottles in total have been made available.

Color: Well, I think this is as pale as a thirteen year old whisky can be... Very light yellow, faint straw color with fast but oily and thick legs.

Nose: Quite shy in the beginning but I already like what I am nosing here: Woolen blankets, straw bales and raw honey. Beeswax lip balm and juniper berries. Adding a few drops of water: Golden Delicious apples, Asian pears and pebbles in the river. Unmalted barley steeped in water and candle wax.

Overall: I loved this one... It's waxy, dusty and yellow and green. Again very spirit focused with minimal cask influence but so damn tasty. It's a fruity, spicy and mineral whisky. From nose to finish it feels like it's balanced very delicately, almost fragile but in the end it holds its texture amazingly well as we have experienced when we added water. Highly recommended... Grab a bottle (or two) while you still can especially at this price point.