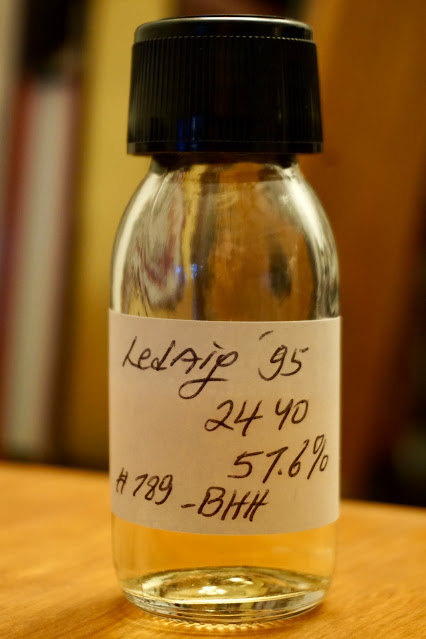 Chapter 7 Ledaig 24yo (51.6%): The last whisky from the Chapter 7 sample pack is a 24 year old Ledaig with quite an intriguing story. It is apparently an unpeated Ledaig. Hold on, hold on... I can easily hear everyone screaming right now but no: It is not a Tobermory either... At least not officially. The cask was clearly stenciled as Ledaig when purchased by the folks at Chapter 7 and they had no choice but bottling it as Ledaig. But they do have a few theories which might explain the situation: It might be simply a mistake done by one of the distillery workers back when the casks were being stenciled after filling or maybe the cask was a part of a series of experiments in the early days of Ledaig when they were still trying to establish the brand's character, the cask wasn't needed later and ended up in the hands of a whisky broker. Or maybe it is Tobermory spirit filled into an ex-Ledaig cask but somehow they forgot to re-stencil the cask after filling it. We probably will never going to figure out what the real explanation is and to be honest who cares... It is distilled in 1995 and bottled in 2020 from an ex-Bourbon hogshead yielding 242 bottles at cask strength.

Nose: Here we go! The (in)famous Tobermory sulphur... The kind of sulphur you cannot blame the sherry casks for, the kind that comes straight out of the still: Unlit matches, sour milk and cheese brine. Forest floor with rotting grass, foliage and wild mushrooms. Apple compote, dry strawberries and vanilla powder. With a couple drops water: Sea breeze and actually hint of peat.

Palate: Matchbooks and dairy notes are the first notes I get on the palate as well... Lactose sugar as in hazy IPAs and cottage cheese. Granny Smith apples, wet wool and cooked mushrooms. Four fruit jam, fennel seeds and rock salt. After adding water: Crunchy malt and green asparagus. Again a reminder of peat. Wet sand and bonfire on the beach.

Overall: I admit that I have an impossible relationship with this distillery... Those dairy notes I am getting almost from all their distillates are really putting me off. Only the modern Ledaig bottlings on the younger side have enough peat to mask them for me. I sincerely hope that the recent renovation in the distillery also addressed this problem. I say "I hope" because I know many many people don't see it as a problem and actually like them as a part of the distillery's character which I totally respect... Anyhow, if you leave all that dairy/lactic story aside it's a fruity, tart and funky whisky which aged beautifully in the cask for twenty-four long years. Thanks to Chapter 7 and Selim Evin for the sample.