Orchard Hill Cider Mill is located in New Hampton, in the state of New York west of Hudson River just south of highway I-84. It is owned by Andrew Emig, Karl duHoffmann and Jeff Soons and they are making cider on location since 2013. They source all their apples from Soon Orchards which has been farming and growing apples in the area since 1910 and they tend to intervene as little as possible during production letting the different apple varieties shine through. They embrace differences between harvest years, stay away from additives and from other modern cider making techniques mimicking natural winemaking practices.

Unfortunately I couldn't have a chance to taste any of their ciders but instead I have two different expressions of their pommeaux on my desk today which actually suits much better to this blog... Pommeau is a drink native to north-western France and basically produced by mixing non-fermented apple juice with apple brandy. Although it is traditionally made by blending two-thirds unfermented apple juice and one-third of one year old Calvados and then aged in relatively large French oak casks for 30 months as formulated and protected by AOC it is not a protected category in US. Therefore I am not quite sure if Orchard Hill followed the exact same method to produce their pommeau but I would be surprised if these guys didn't. The name of their brand "Ten66" is inspired by the year 1066, the year of Norman invasion of England. 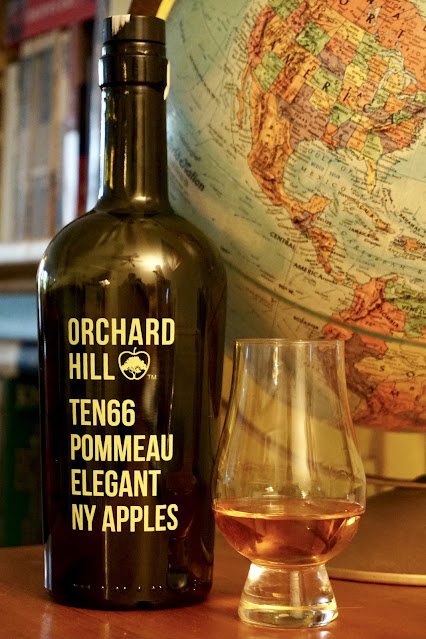 Orchard Hill Ten66 Pommeau (20.0%): The apple brandy used for the mix is distilled from their own cider and aged in French oak wine barrels and the apple juice component of the blend is pressed using apples picked from Soon Orchards. While McIntosh apples were used exclusively to produce the the brandy the apple juice was made from a large variety of apples including Empire, Cortland, Northern Spy and many others. In the end the blend was filled in used French oak barriques and and aged for a minimum of three years.

Color: Light copper color with an orange tint and pretty thick and fast running legs around the glass.

Finish: Sweet and mouth drying with and apple seeds and spiked apple tea.

Overall: So hard to stop yourself and not to finish the whole bottle at one sitting... It can pair basically with everything: Blue cheese, milk chocolate or any dessert with pastry cream and flan. 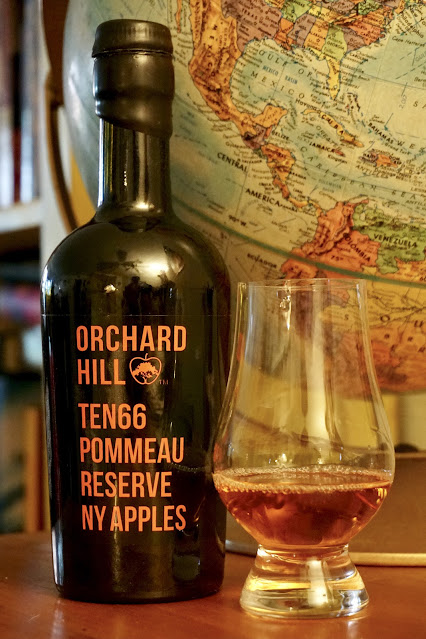 Orchard Hill Ten66 Reserve Pommeau (18.5%): This one is produced basically the same way as the one above aged in used French oak barriques between 4 and 7 years instead of only 3.

Color: Much darker copper color with almost a red shine and the same thick but visibly slower and oilier legs.

Nose: Sweeter and less tart compared to its younger sibling but I also get more mushrooms on the nose. This time cooked mushrooms though... Also more red soft apples less crunchy Golden Delicious if that makes any sense. Cranberry juice, red jello and light dusting of nutmeg and cinnamon.

Overall: This one is definitely a drink you want to take your time with. Simply gorgeous... I could sip it with cured meat, bitter chocolate or pair it with a cup of espresso after dinner. Yum...

Price: $43 (375ml bottle)
Thanks to Karl duHoffmann for sending me these sample bottles..!