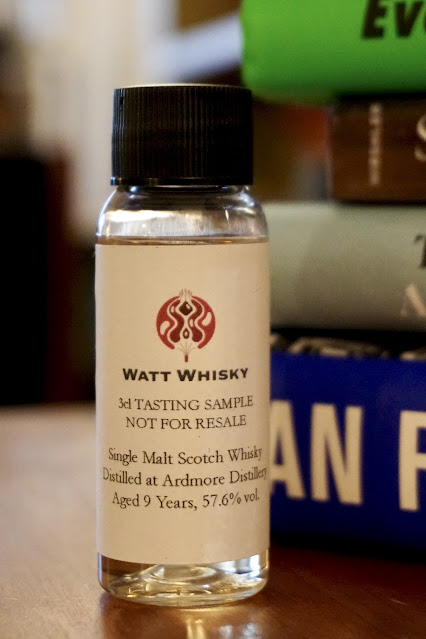 Watt Whisky Ardmore 9yo (57.6%): Does anyone remember David Stirk releasing 8yo Ardmore casks under his Creative Whisky Co. label a few years back one after another, after another.? There must be a secret stash of 8 - 9 year old Ardmore casks somewhere in Scotland known to former Cadenhead's employees only. Well, wherever those casks are kept it looks like it's Watts' turn now to dip into... I am obviously being facetious but there are indeed far too many young Ardmore casks bottled by independent companies in last five years or so. You will remember the Malt Nuts Ardmore event from last year I posted about where we tasted twelve different expressions from independent bottlers all aged between eight and twelve years. Anyway, let's see what Watt Whisky has chosen for us. It is distilled in 2011 and aged in an ex-bourbon barrel for nine years before being released. 238 bottles have been made available at cask strength.

Color: Pale yellow straw, lemon chiffon color with small teardrops around the glass taking their time before running down.

Nose: It's way peatier with tons of iodine compared to many other Ardmore bottlings I had before. Most likely this one is one of the Ardmores aged in an ex-Laphroaig cask. Wet sand, iodine tincture and drying seaweed first. It gets sweeter after being allowed to air: Sugar kelp, dried dates and burning sage. Earl Grey tea bags, fresh ginger slices and ground coriander. Adding a couple drops of water takes it back to the seaside: Last bits of a dying bonfire on the beach, ocean spray and sea salt.

Palate: A little mute in the beginning: Dry roasted pine nuts, grilled banana peppers and burnt ends. Water works much better on the palate than it did on the nose: Grilled pineapple slices, fresh rosemary leaves and ginger beer.

Overall: First of all it's indeed way peatier than I would ever expect from an Ardmore... In a blind tasting my money would be on a young Laphroaig or a young Ledaig. Any peat-lover would enjoy every second of this whisky from nose to finish without a doubt. It is a little too predictable and maybe safe for my taste but that's not necessarily a bad thing... It's indeed a solid cask. Thanks again to Kate and Mark Watt for sending this sample all the way to Los Angeles literally from the other side of the world..