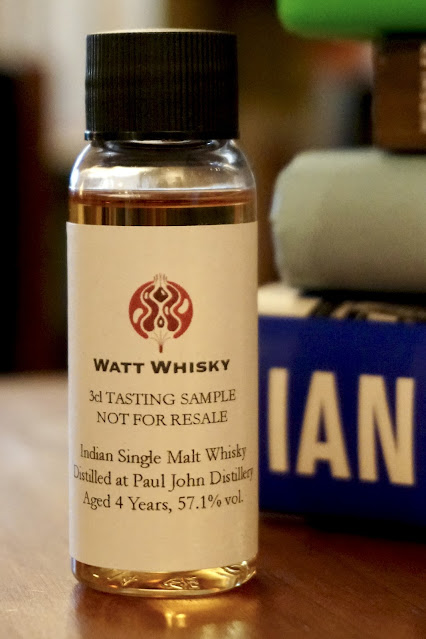 Watt Whisky Paul John 4yo (57.1%): While as Southern California Whisky Club we are patiently waiting for our own single cask Paul John to clear customs I have a sample from. a similar release on my desk we were expecting to happen and looking forward to for quite some time: A collaboration between Watt Whisky and Shilton Almeida from Paul John. To be honest I was actually hoping that they would bottle a Geuze cask from 3 Fonteinen or Oud Beersel for their first project (wink, wink..!) but I'll happily take this one instead... It is a single malt whisky distilled by Paul John Distillery in 2016 and matured for four years in an ex-Bourbon barrel in Paul John Distillery's famous underground cellars which yielded 279 bottles at cask strength when bottled.

Color: Light amber, polished copper color with a ring of small teardrops all around the glass turning very slowly into oily and thick legs.

Nose: Classic Paul John... The moment I bring my nose in I pick up roasted sunflower seeds. Some people would say tahini or roasted peanuts and to be honest all of those are spot on as well. Peanut brittles, nutmeg and cloves. With water: Cinnamon latte, spiced Mexican hot chocolate and burnt bottom chocolate skillet cake.

Overall: An incredibly active cask... It has to be a barely used 1st fill ex-Bourbon barrel because it actually feels like a new charred oak barrel to be honest. I know if it was the case they definitely would say that on the label but it still makes you head spin. It's very spicy, oaky and nutty... You feel the influence of the wood in full but in a best possible way imaginable. Somehow active 1st fill or new charred oak casks work great with Paul John spirit without ending up overly woody or too crafty. Love these single cask Paul Johns, great cask management.