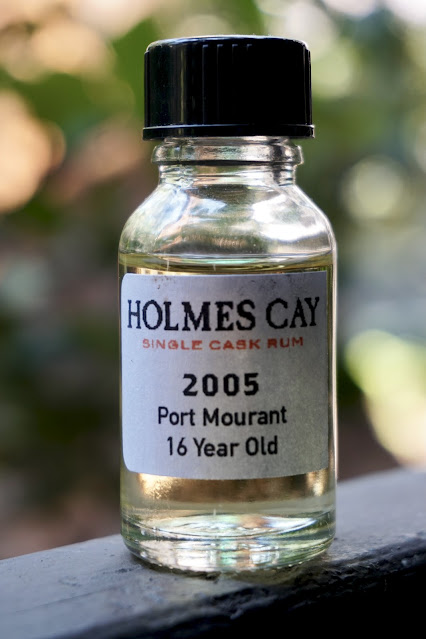 Holmes Cay Port Mourant 16yo (53.0%):  I have to admit that amongst all the single cask Holmes Cay rum samples I was tasting through this week the last two were the ones I was most excited about. I have always been a big fan of aged Guyanese rums and these two are sounding incredibly delicious... First one is a 16 year old rum distilled by Diamond Distillery in 2005 using the famous wooden pot stills of old Port Mourant Distillery brought to the site after its closure. The spirit was filled in ex-Bourbon casks and aged in those for 16 years in UK before being brought to New York State to be bottled. This sample is filled from cask number 31.

Overall: Not what I expected from it at all after spending 16 years in a cask but it's a damn good rum for my two cents... It's still raw, very spicy but also floral. Herbal, sour and sweet. I know it doesn't quite sound right because of the price tag attached to its neck but I would die to taste a Daiquiri made with this rum. Next and last sample from Holmes Cay will be another Guyanese rum from Diamond Distillery and this time it will be an 18 year old Uitvlugt. Like always thanks to Southern California Whiskey Club and Michael Ries for the sample.