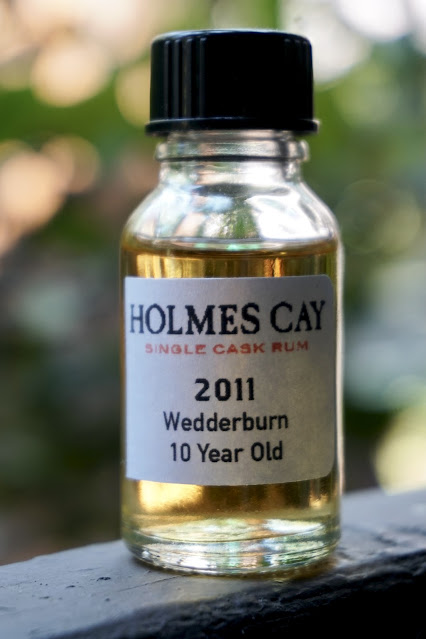 Holmes Cay Wedderburn 10yo (59.0%): Where did we leave off..? The fourth Holmes Cay Single Cask Rum is from Jamaica and distilled by Clarendon Distillery. Clarendon is a distillery with many names and in this case it is called Wedderburn on the label... The distillery is built in 1949 in the southern part of Jamaica and after several upgrades in years it reached a capacity big enough to supply major brands like Captain Morgan and Myers's as well as more niche labels like Monymusk and Port Royal. The sample I have today on my desk is a 100% pot still distilled, medium ester rum initially aged for three years in Jamaica in four ex-Bourbon barrels. All the barrels got moved to UK after those three years for another seven years of aging and finally shipped back to the west side of the ocean but this time to New York State to be bottled. Those four barrels yielded 1,050 bottles in total at cask strength and the rum I have is pulled from the cask number 25.

Overall: Pretty great... Everything you would expect from a Jamaican rum. Rubbery, funky and fruity. It noses and tastes younger hence the long European aging but that's exactly what you would expect and hope from a relatively high ester rum. At least I do. I think this release is still available around... Thanks to Southern California Whiskey Club and to Michael Ries for the sample.