peat pies of the month...

Compass Box The Peat Monster Reserve (48.9%): This 1.75L comically oversized bottle is kind of the Excalibur of the Compass Box range. The whisky definitely looks handsome in this bottle... I don't think that it is a big secret that the original Peat Monster is a blend of three single malts: Caol Ila, Laphroaig and peated Ardmore all aged in ex bourbon casks. I have been told that the secret ingredient in the 5th year anniversary Reserve edition is coming from Clynelish Distillery aged in new French oak barrels. Only 1325 bottles are released and on top of everything it's abv is boosted. I have a very very good feeling about it. Color: Pale, clear linden tea. Nose: I have to say it is less punchy than the original version. Very sweet burnt peat and pleasing briny sea air. Iodine, dead bonfire on the beach, scuba gear, engine room. With a few drop of water and after allowing a few seconds all the vanilla, banana and guava notes are getting released. I would say it becomes almost floral. Palate: Very salty and spicy. Peat is not leading. Seaweed, kumquat, bergamot, black pepper. Water brings olives, capers and rosemary to the palate. Finish: It is not powerful but long. Starts with baked apple pie, cinnamon. Other spices take over till it finally fades out with sweet smoke and tar. Overall: I couldn't help comparing it all the time with the original Peat Monster but it is a totally different whisky. It's definitely rounder, sweater and reacts much more to a few drops of water addition. Surprisingly I found warm and calm Mediterranean breeze in this expression instead of cold and restless North Sea air. It's another great creation from John Glaser. 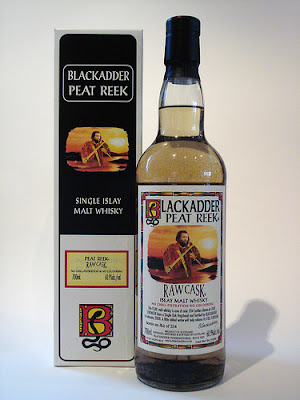 Blackadder Raw Cask "Peat Reek" 11yo Islay Malt Whisky (58.1%): To be honest ordering this bottle was the first thing I did right after Whisky Live New York. It was on top of my list and now rests in my cabinet. Blackadder is an independent bottler who release cask strength expressions without any kind of filtering or coloring under their Raw Cask series. They only pay attention to avoid wood splinters from the cask passing to the bottles. Any other sediments, impurities and residues naturally coming from the cask are left in. Peat Reek doesn't have any information on it's label about the distillery the cask is originated from but I have been told at Whisky Live that it is a Caol Ila. The whisky is distilled in May 1996, spent 11 years in an oak hogshead and bottled in August 2007. Color: Very light, pale greenish straw. The bottle is kind of cloudy with charcoal flecks and detritis coming from the cask. It's a good idea to let them settle a little bit at the bottom of the bottle before you start to pour. Nose: Much more gentle than I would expect. Didn't get the monstrous peat punch too much. Quiet salty though. Brine, dried seaweed, raw shellfish. Very medicinal, like dentist's office. With added water I could nose more peat, some diesel oil, mufflers, sulphur, paint thinner and burnt rubber. Palate: It is like licking a chunk of salt. One of the saltiest drams I ever had. Needs a few drops of water, immediately... With water salt gets thinner and allows peat to show up but still covering my mouth and dominating the palate. Salted bonito, olives, salted capers, matches and exhaust smoke. Salted nuts, dried fruits, and juniper berries. Pretty dry. Finish: Quite long. Salt stays longer on the tongue. Sour and sulphury finish fading out with smoking matches. Overall: That was quite an experience. I am kind of tired... I didn't expect that salt will steal the scene from peat from nose to finish. It tastes like some old beautiful Port Ellens or old Taliskers I had before. Definitely the whisky got better and better in time benefiting airing and water. You have to get over the salt shock to taste the other stuff. Second round was much better. I have to say this dram is a tough nut but pretty damn tasty and special...
blackadder blended malt caol ila compass box independent bottlers islay scotch whisky single malt whisk(e)y