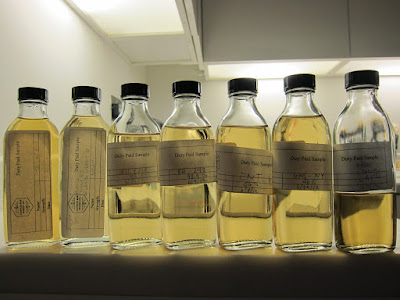 The last week of my London summer I have been extremely lucky to have the chance to visit Compass Box offices in Chiswick and meet John Glaser. For four hours we geeked out about whisky, tasted samples together, exchanged stories and talked about the industry. It was an inspiring and cheerful day beyond belief. Earlier in the day when we were talking about the importance of the cask selections he briefly told us the story how he started in his early years in the industry to get obsessed about studying different cask types and their effects on maturation and how this accumulating knowledge shaped basically the idea of his style of blending whisky: Using less components but only casks of exceptional quality. It was also exciting to watch how he was fascinated and inspired by the history of whisky making and especially by the history of art of blending. He collects and studies every written document about the subject he can find. Evidently Great King Street New York is inspired by a recipe of Alfred Barnard he found during his research. Pretty exciting...

Throughout the day we tasted the entire signature range as well as a few limited releases and some new stuff. We sampled the individual components of the Compass Box blends and blended our own whisky which I would like to talk about later in a separate post. At the end of the session I left Compass Box Studio with a lot of sample bottles and a huge smiley face. Loud cheers to John Glaser for his honest chat and for a truly inspiring and exciting day. It's just a matter of time before I start my own blending experiments in the kitchen...

Anyway, let's start with the Flaming Heart. I want to taste the newest Flaming Heart expression and the 10th Anniversary Bottling which was released back in 2010 side by side. If you will remember it was tire-bouchon's best dram of 2011.

Flaming Heart 2010, 10th Anniversary Bottling (3rd release) (48.9%): If I am not mistaken this beauty is a blend of 11yo Coal Ila and 18yo Clynelish casks. Color: Pale yellow, hay colored. Like a good barrel aged Chardonnay. Nose: Easy there..! Diesel fuel and tincture of iodine like a slap in your face at the first drag. After allowing it to breath it comes to its senses. Does anybody remember the old fashioned diving masks our fathers used to swim with? The ones with a giant single tempered glass as big as a TV screen and with rubbery smell. That's it! Imagine it covered with wet beach sand. Adding a few drops of water amplifies the sea salt and brings unripened bananas and green apples. Palate: Subtle smoke, burnt wood with coarse sea salt and black pepper. Salted almonds and brazil nuts. Gets sweeter in time like salted caramel bites. Hint of green fruits hidden way back: kiwi, green mangos and green almonds. Definitely saltier than I remember. Finish: I was about to say "feels a little short after all the pondemonium at the palate" but I have to say that the sea salt lingers very long even after everything fades out. Oh, just a second... Some flower honey at the distance. Overall: A truly beautiful marriage. I wish I put a bottle somewhere hidden when I had the chance. It will always be remembered even after years...

Flaming Heart 2012 (4th release) (48.9%): And here is the long awaited soon to be released Flaming Heart 2012... A blend of Ardmore, Clynelish and Laphroaig casks. Color: Almost the same like the 10th anniversary bottling. If you stare at them for a long time maybe you can tell that this one is a notch darker but why would you do such a thing? Nose: Quite different. Less medicinal but grassier than the 3rd release. You can still get the sea spray but this one is coming from colder seas. I can nose a young(ish) waxy component in here: Clynelish..? Old glossy paper magazines from 70's, faint extinguished bonfire, white candle wax, concorde pears, strawberries and shredded mint leaves. Yummy red gummy bears. Palate: Salt, mint, eucalyptus leaves and stinging nettle. Stewed prunes, black currant and raisins. Skillet apple pie and baked apricots. And now imagine dusting everything with nutmeg and cinnamon. Smooth and creamy. Finish: Long and salty with pleasant toasted wood notes and burnt orange peel. Overall: Wowza! A truly amazing dram... All I can say is that it was worth waiting for. I don't know if it was the intension or not but this is way more approachable and more-easy drinking than the 3rd release. Cannot wait for the official bottling.
blended malt compass box independent bottlers london scotch whisky whisk(e)y