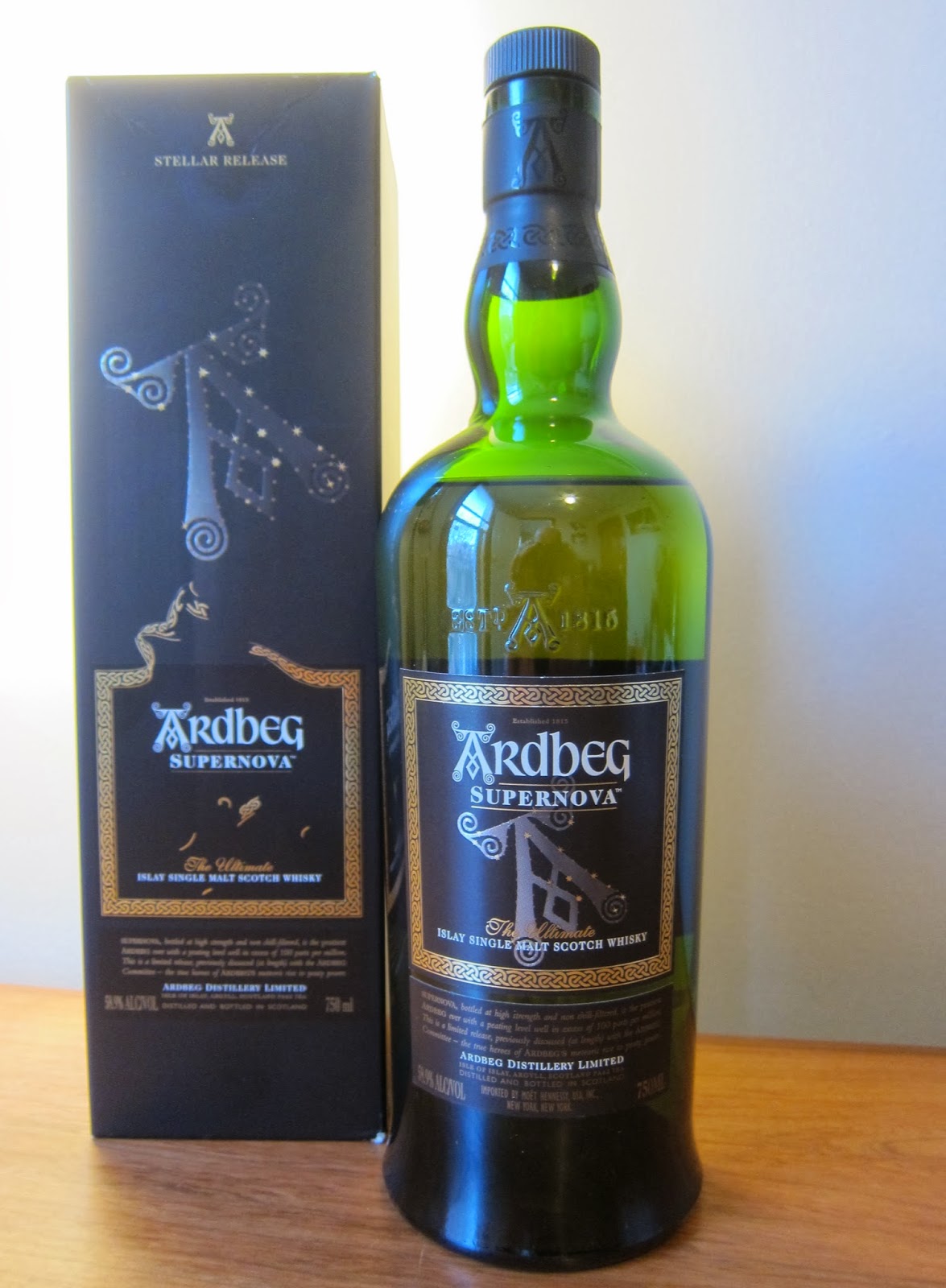 Ardbeg Supernova (2009 release) (58.9%): A long time ago on an island far far away there were two master distillers working day and night in their dark labs to create the peatiest whisky ever known to mankind while listening to the waves pounding the stone walls of their distilleries. Some even said that they made a pact with the Devil... Hundreds of whisky lovers lost their senses of taste and smell as a result of their experiments but they simply didn't stop until finally the scientists proved that it was physically impossible to break the four digit ppm barrier in malting process. Eventually they had to give up their hopes but started another hopeless quest instead: They would leave their island and sail to the promised land to find the holy cask made from the single oak tree of the garden of Eden. Nobody has heard about them after... Some say you can still hear the cries of peat-freaks at those distilleries late at night begging for mercy.

Sorry, I got a little carried away... Back to reality: So, like I said first Supernova release was one of the spearheads in this "who is the peatiest?" battle back in 2009. I have to admit that I felt in love with this dram immediately after I tasted it back in the day. I purchased a bottle right away when it was actually (believe or not) possible to score one. Shortly after its release it was sold out and disappeared from the surface of the earth. I kept mine in my whisky cabinet uncorked since then like the holy grail. But recently after seeing the bottle on a couple websites with outrageous price tags I thought it's time to pop it open and enjoy. And at the new year's eve we did so... It is bottled at 58.9% abv. and there is no age statement on the bottle. Let's see if it still tastes as good as I remember: Color: Yellow gold, hay like. Nose: Good Gracious! It smells exactly the day I walked in Ardbeg Distillery's still room. All memories got triggered. Iodine tincture, band aid and sweet chalky soot. After you get over the phenolic punch in your face you eventually start to get some lemon sugar cookie dough, vanilla pod scrapings and marzipan. A splash of water release beautiful grassy aromas: Freshly watered grass in your backyard, green wood shavings and also wet beach sand. I can nose this dram for hours, flawless... Palate: Suspiciously drinkable at a strength of 58.9% abv. but very mute with mostly lemon and orange zest. Adding a few drops of water brings damp black garden soil, barbecue coal and lightly roasted espresso beans. Some chewed cigar butt, rubber band balls and maybe jonquils as well. Dried cranberries or dried red cherries would probably taste like this if they were put on a barbecue grill and forgotten there. Finish: Endless... Tar, ash and black pepper. Overall: A dream come true for every peat-head without a doubt. Like every young and heavily peated whisky the nose is multiple times more enjoyable than the palate though. I personally enjoyed very much to see the Ardbeg spirit stripped to its bones again nevertheless. Not very sophisticated but bold, vibrant and keep you on your toes. Would be a great outdoor dram in your flask for a long winter hike. It made me remember (and miss) my visit to Islay and old Ardbeg expressions like Still Young, Almost There and Renaissance (sighs...). This dram is definitely a journey and a good one...