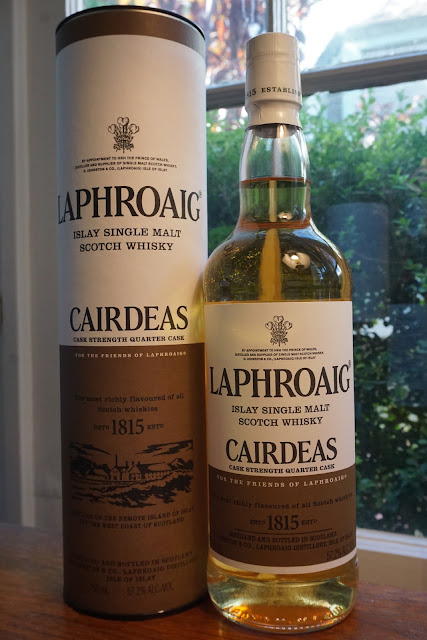 Laphroaig Cairdeas 2017 (57.2%): I know that I am pretty late for this year's Cairdeas blog party but unfortunately couldn't pick up my bottle earlier... I actually tasted the whisky two weeks ago during the "Deconstruction of Laphroaig Lore" master class ran by Laphroaig's master distiller John Campbell and hosted by Southern California Whiskey Club. I absolutely loved it but didn't have the chance to spend time with it to write down proper tasting notes till I finally sat down at home last night and open my own bottle. This year's Cairdeas release is basically the cask strength version of Laphroaig's regular Quarter Cask expression instead of an experiment with another fortified wine cask finish like they do almost every year... Whiskies aged in first fill ex-bourbon casks not less than five years got transferred in quarter casks for an additional six months and then 177 of those casks are selected to be bottled for this year's release.

Nose: Roasted sunflower seeds and sesame brittles. Olive oil, fresh squeezed lemon juice and rosemary. After airing it a few minutes it gets significantly sweeter... Vanilla, whipped cream and cloves. Nutmeg dusted cappuccino, porter beer and toasted wood. A few drops of water opens it up nicely. Now it is more like a Laphroaig we are used to nose... Less dry, with ocean spray, sea salt and wet sand. I am loving it so much...

Palate: Soot, char and gasoline... White pepper, allspice and cumin. As dry as a whisky gets I suppose. Savory and spicy... Apple skin, lemongrass, rubber gloves and clay. Pumpkin seeds. How is it so drinkable at this abv..? Unbelievable... Adding a few drops of water has exact same effect like it had on the nose. Sea water, band aid and dark chocolate. Caramel eclair, cream puffs and butterscotch shortbread.

Overall: This is a beautiful whisky, simple as that... Very straightforward, uncomplicated but bold and damn tasty. Although it is actually perfectly ok (somehow) to sip at cask strength it opens up so beautifully with every drop of water added. It's creamy, doughy, citrusy, spicy and toasty... Layers and layers of goodness. Kudos to John Campbell and to his team. Well, Sir... Would you consider keeping this release as a permanent addition to the line-up..? Just asking... Anyway, I say go and get a bottle while you still can.