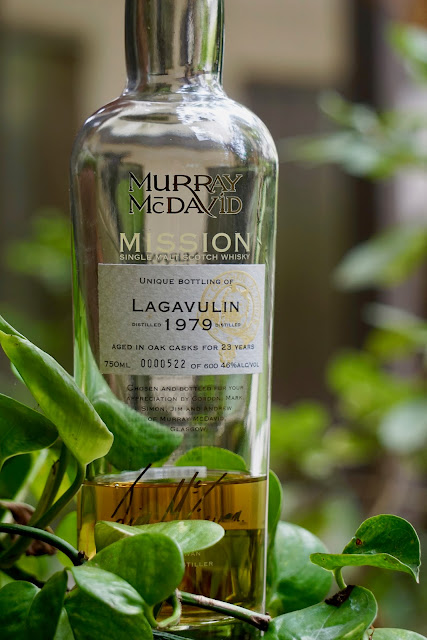 Murray McDavid Lagavulin 1979 23yo (46.0%): Today I have a rare Lagavulin bottling from back in the day when Murray McDavid was owned by Bruichladdich in the beginning of 2000s. The whisky is released under their "Mission" series which even today under the new ownership indicates older and rarer bottlings. For some reason it carries a huge signature of Jim McEwan on the front side of the bottle as "master distiller" which is very misleading and also has a note in a way smaller size saying: "chosen and bottled by Gordon, Mark, Simon, Jim and Andrew of Murray McDavid". It is not a single cask so far I can understand hence the line on the label: "Aged in Oak Casks". The spirit is distilled in 1979 and bottled in 2002 yielding 600 bottles in total at 46% abv. No other info about the casks is given.

Overall: It's so medicinal and fishy unlike any Lagavulin I tasted before. If I was tasting it blind I would guess it as Caol Ila or Laphroaig instead. Definitely my kinda Islay... It is raw and vibrant in spite of its age. Highlights the character of the distillery and its new make and location instead of the barrel the whisky spent its life in. Probably bottled from 2nd fill ex-bourbon barrels. It is hard to believe what money could buy back then... Incredible value. Thanks to Sku for generously sharing this bottle during his "kill bottle" night.